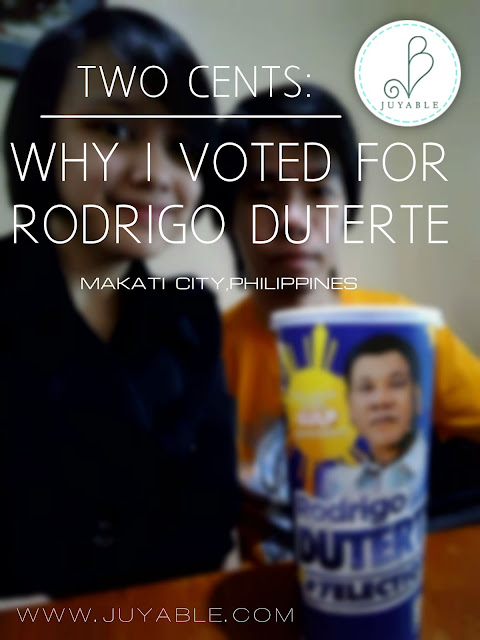 This is my first time to write about a certain political candidate and I’m glad I did. In my opinion, Philippine election 2016 is the most controversial so far specially the race for the next President. Black propaganda and broken friendship everywhere may it be on Facebook, at the office and in every baranggays. I think, Filipino voters are more engaged and involved this year.

Yes, I am a die-hard “Dutertard”. It started I believe 3 years ago when I first heard about Davao City having unique municipal ordinance led by what they call “the Punisher”. I then started to look up to him and told myself, every municipality should have a mayor like him.

It was 2015 when various people at social media urged the fearless mayor to run for the highest position in the government, the  Presidency. It may sound ambitious but at the back of my mind, I was dancing with glee and now, I am decided, I am sure who to vote for (Yes, even if he repeatedly said he won’t run for President). I am a registered voter but did not practice my right and responsibilities just because I feel that my vote is powerful yet precious. Yes, I will only vote for those who I believe in and I believe the time has come (even the uncertainty of Mayor Digong’s filing of candidacy)

Most of his supporters lose hope when the day of filing of candidacy came and he did not show up nor filed his intent. But then, a miracle happened, he replaced PDP-Laban candidate Martin Dino after the latter withdraw.

The campaign period came and it was bloody and dirty. Black propaganda’s were everywhere, thrown at Mayor Digong like there’s no tomorrow. But I did not listen nor believed not because I am blinded, but because I will choose the lesser evil in this times of crisis.

I am happy that my family and close friends were on the same page as I am. I was praying that finally, the Filipinos make up their minds and vote wisely. The day of election came, this is my first time to vote and I am proud to say that my precious vote was not put to waste.

Mayor Digong was leading, far way from his contenders and after some time, it’s official, we have a new President. The 16th President, the 1st from Mindanao, no other than Rodrigo Roa Duterte. Yes, I cried. Tears of joy. Finally, my dear countrymen, we are awaken. The change must now start.

As a Filipino who worked in Middle East, I saw how progressive and disciplined a country like United Arab Emirates is. Regardless the religion of the leader and the people, I came to a realization that discipline is the key to a better country.

President Digong never fail to deliver. From drug users/pushers who willingly surrendered themselves to starting the 911 emergency hotline and 8888 hotline for government related concerns.

We still have a long way to go, but if we help our leaders and start the change ourselves, a better nation will be soon attained. I pray that instead of bashing and pulling our President, we help him and give him more encouragement. We should also pray for his safety and well being.

She is a Manila-based Global Technical Recruiter, a shutter-bug and a Starbucks merchandise collector who loves to eat and wander with her Le Husband and Le Potter Head son.