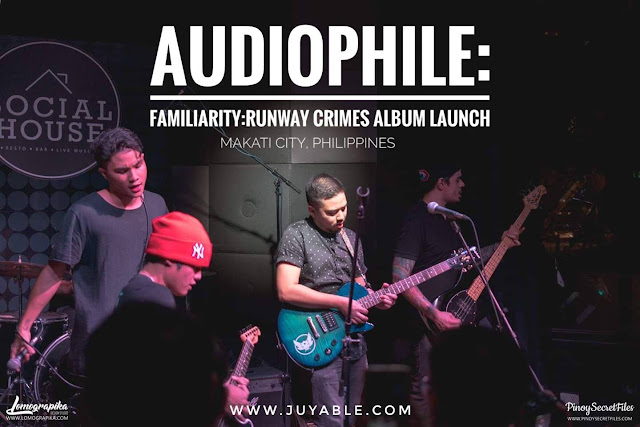 I love working with Red Ninja Productions on behalf of Pinoy Secret Files. We are invited as one of the media partners for Runway Crimes “Familiarity” Album Launch last August 25, 2018 at Social House, Makati City.
Runway Crimes is a post-hardcore indie band started almost a decade ago composed of group of friends headed by Paolo Tabuena (Vocals), Matthew Warren / Chaco Cruz (Guitars), Martin Hocson (Bass), Paolo Owyong (Drums) and Philip Verzosa (Keyboards/Synth).
The event was kicked off by singer-songwriter, visual artist, graphic designer, fashion designer, and published author – all rolled into one convenient sushi, Reese Lansangan (my favorite). I was really surprised and happy that she performed since she was not in the original line-up.

Lions and Acrobats on the other hand performed their greatest hits and the crowd went crazy. The independent band is known to be successful with orchestrating multiple melodies simultaneously through three guitarists (Jim Lopez, Carlo Lava, Andrew Son), a bassist (Oteph Tumambing) and a vocalist (Icoy Rapadas) that thrives into bobbing and weaving through thick and intricate chord progressions which are all of course, backed by the drummer (Pedro Tumibay) following strict dynamics and timely syncopation.

Last but definitely not the least, Runway Crimes, as they unveil some of their songs from their 11-track album Familiarity.