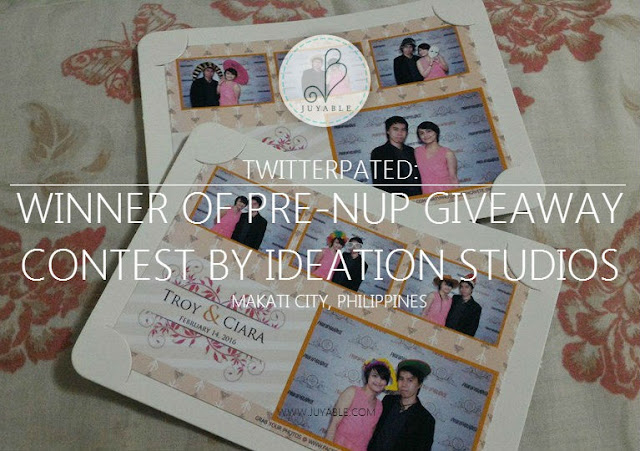 May 4, 2014, Sunday, I was browsing my Facebook feeds when I stumbled upon a photo shared by a former workmate, Ms. Dace Moris. It was a contest for a free Prenup photo shoot courtesy of Ideation Studios.

I met Dace and her boyfriend during our company outing last 2013. My initial reaction when I saw the picture she shared on Facebook was “Engaged na pala si Dace at Emil”. As a sucker for freebies and inexpensive finds, I also shared the picture and tagged my partner together with our engaged friends.

So here were the mechanics of the contest: 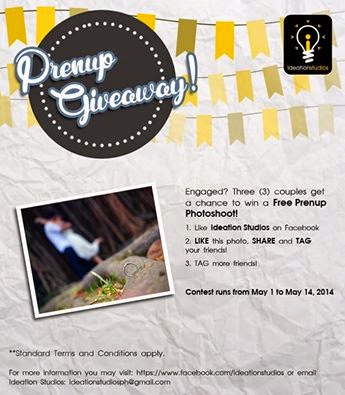 Engaged and getting married soon? This contest is for you!
Three (3) couples get a chance to win a Free Prenup Photoshoot! How? Simple:
1. LIKE Ideation Studios on Facebook
2. LIKE this photo, SHARE and TAG your friends.
3. TAG more friends!
This contest runs from May 1 to May 14, 2014.
Contest winners will be announced by the end of May 2014.
*Standard Terms and Conditions apply*
I honestly didn’t hope nor expect anything. I actually forgot that I shared that picture. Then yesterday, May 30, 2014, Friday, after a sumptuous dinner with my partner, I received a Facebook message and a friend request from a stranger named Kevin Lee. 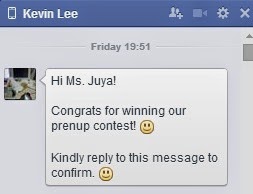 So I have to check his profile and found out his from Ideation Studios then I begin to recall the picture and contest I joined a few days ago. So I checked their page and this is what I found: 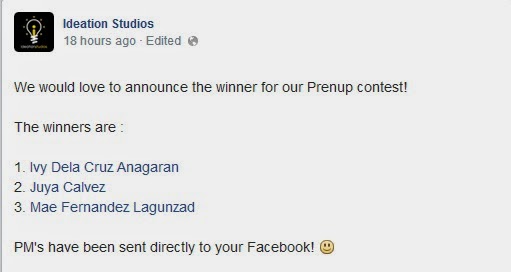 It was a mix feeling of uncertainty, happiness, surprise and excitement. I replied to Kevin after a few minutes of contemplating. I was worried that it was a scam when I got no response. I further checked their page and saw a familiar face, it was Dace and Emil on their team picture.

I am really clueless that Dace and Emil are from Ideation Studios. So I sent Dace a private Facebook message asking if she is from Ideation Studios, and she confirmed yes. I asked her if she was one of the judges or if I was personally handpicked. She told me it was her teammates who choose the winners and she was also surprised. She just found out that I joined and won when she saw the announcement of winners on their Facebook Page. She congratulated me and expressed her hope to be a be part of the assigned team who will conduct the photo shoot with us.

Mr. Kevin Lee responded this morning and we talked about the terms.


Terms and Conditions:
1. Meals will be provided for the winners of the contest during their prenup shoot
2. Photoshoot will only be limited to no more than 3 hours
3. Props in accordance with the approved theme will be provided during the shoot
4. Contest only includes Prenup Photoshoot, Save the Date / Video prenup is not included
5. Makeup for the Prenup photoshoot is not included.
6. Winners of the contest will be the one to pick where and when they want their Prenup to be, provided that they will shoulder the transportation costs, permits and any other expenses that might incur during the photoshoot.
7. Standard Usage Licenses will apply for the photos that will be taken during the prenup.

I also requested Emil and Dace to be part of the team who will conduct the photo shoot and luckily he agreed. Thank you so much Mr.Lee and company, may God continuously pour you and your team with blessings.

Ideation Studios offers affordable wedding packages. I highly recommend them for those frugal couples whose looking for good quality yet affordable photography services who will capture their big day. For more information, you may send them a message via their Facebook page or email: [email protected]

My partner and I are so blessed. My purpose was for my friends to join the contest since they already have their wedding dates but look who won. We don’t have our official wedding date yet and we believe it will happen in His time.

What happened yesterday was already a blessing from our Creator and we are very grateful. Soon, our big day will come and we are glad and excited that Ideation Studios will be part of our journey towards our happily ever after. Cheers to us all!

She is a Manila-based Global Technical Recruiter, a shutter-bug and a Starbucks merchandise collector who loves to eat and wander with her Le Husband and Le Potter Head son.